Hand of the Heavens

After nearly 30 years of apprenticeship, a tattooist continues his family legacy of kākau, the practice of traditional Hawaiian body art.

In the screened-in lanai of Ka Pā ‘O Hūnōhūnōholani, Keli‘iokalani Mākua is preparing for this day’s work of kākau, the traditional art of Hawaiian tattoo. Laid out before him are slender mōlī, or tattooing tools, exquisitely handcrafted from wood and bone. A palm sized ipu pa‘u, carved from volcanic rock, holds a shallow well of obsidian-black ink. The men who will hold taut the recipient’s skin to better receive the ink, the stretchers, first gather to share in a ceremonial drinking of ‘awa. As pule, or prayers, are offered to Kāne, the god associated with kākau, Mākua falls momentarily silent. A kahuna kā uhi, or priest in the art of kākau, Mākua bears a mantle of great spiritual and cultural responsibility: He serves as the medium between the divine and man.

Before he works on an individual, Mākua will sit and speak with that person—sometimes for hours, sometimes for a stretch of days—to learn of the individual’s family and heritage, of their trials and tribulations, of their hopes and dreams. In Mākua’s mind, the intangible becomes tangible as he settles upon an appropriate design. Each is relevant to that person’s life, explains Mākua. The designs reflect the recipients’ past, present, and future. For many, a first traditional tattoo is an ala niho, a pattern representative of the individual’s family and customs. “Family is what grounds you,” Mākua says. “So we often start there.” 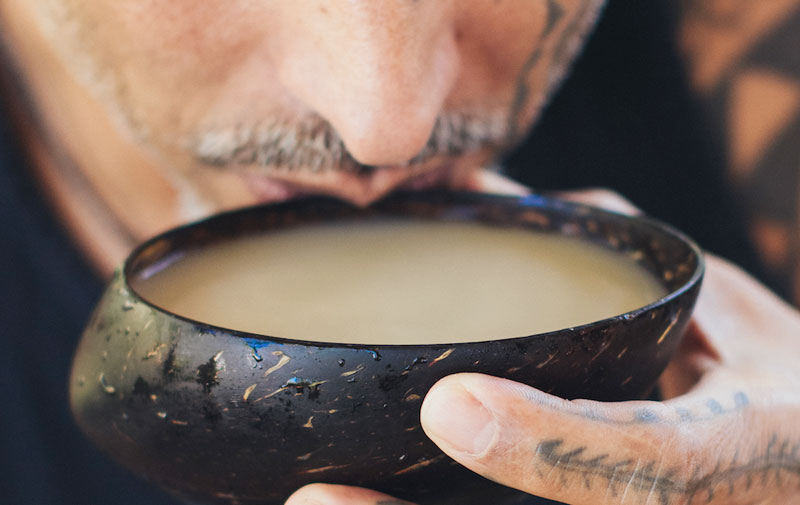 On this morning, work has begun on a man receiving his ala niho. The space feels quiet, nearly reverent, as Mākua selects an appropriate mōlī and hahau, or tapping stick. Sitting cross-legged before the reclining man, Mākua nods almost imperceptibly to his stretchers. They pull taut a diamond-shaped area of skin on the man’s upper thigh. Mākua dips the fine teeth of the mōlī into the inkwell. Holding the hahau at a cant, he brings it down upon the mōlī in a series of swift, measured strikes. Tap-tap-tap. Tap-tap-tap. The tool’s fine teeth pierce the skin with each strike, releasing ink under the surface. Slowly, a geometric design with a recursive beauty begins to emerge. Over the next few hours, the distinct staccato of tapping fills the pā, rhythmic and hypnotic. Mākua remains focused, as if the susurrations of his ancestors are in his ear, guiding his hand. Skin that was once silent now speaks with meaning.

For many who encounter Mākua for the first time, his impressive body art draws both intrigue and unveiled stares. Much of his body is covered in uhi, or tattoo, including his face. A large bold rectangle surrounds his eye. Two lines of geometrics, running from forehead to chin, intersect the block. More lines are visible under his cropped hair. Yet Mākua is unbothered by stares. He didn’t decide upon the face tattoos to look intimidating or cool, like many might. “This is who I am,” he says. “This is my culture.” 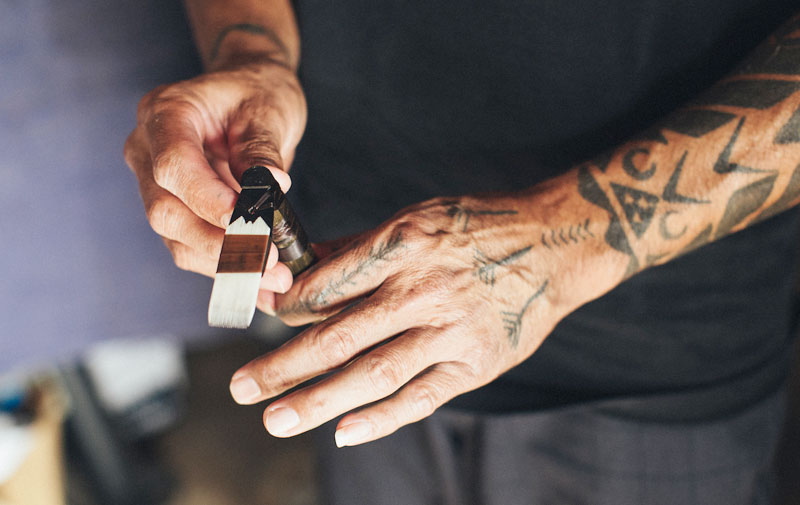 Though Mākua holds the venerated title of kahuna kā uhi, he hadn’t set out to become one. He didn’t even grow up in Hawai‘i. His father, Lee Foreman, is from Colorado, and arrived in the islands in the early 1960s. Here, he fell in love with both the culture and Ka‘imiola Mākua. The two married and relocated to Denver to raise their family. As a child, Mākua’s inquisitive nature was well known. “He was always in my pocket,” Foreman says. “Always following me around.” Mākua was particularly drawn to his Hawaiian roots, absorbing whatever cultural knowledge he could acquire on visits back to Hawai‘i. “Even back then I was hungry for that knowledge,” Mākua says. “I would sit at the feet of my elders and just listen.” By the time he was in fifth grade, he could recite his genealogy back eight and nine generations, to the 1700s.

Childhood took a strange and tragic turn. Mākua developed a rare form of cancer, which led to a pendulum of doctors’ visits and hospital stays throughout his middle-school years. Faced with mortality at a young age, Mākua pondered life and death. He developed an acute awareness of the elements that held paramount importance to him, namely family and culture. He promised himself that once he was well, he would find his way back to the islands. The native son would return home. 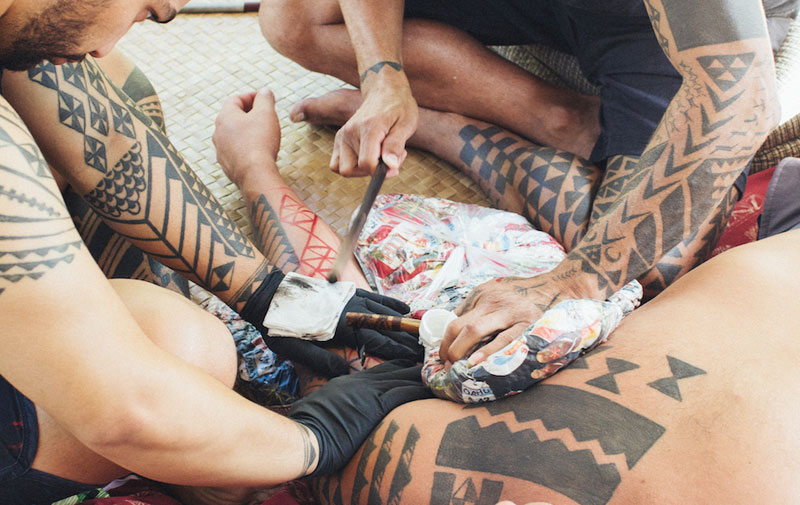 At 18, Mākua made good on his promise. Returning to Hawai‘i, he embarked on twin paths: He found successful work as a construction foreman, while he sought a means to deepen his connection to Hawaiian culture. He was taken under the wing of his cousin Keone Nunes, the master tattooist credited with bringing kākau back from the brink of extinction. For Mākua, the sacred work spoke to him. Kākau had long been a part of his family’s lineage. “I was young when I first started with Keone, maybe 20 years old,” Mākua, who is now 48, says. “Whenever Keone needed me to help out, I was there. I would always take his calls and go, I didn’t think twice.”

Mākua apprenticed under Nunes for the next 27 years, helping to craft mōlī, stretch skin, and learning all facets of kākau—historical, spiritual, cultural, and social. For him, working alongside his cousin was an honor. In 2017, Nunes informed him that it was time for his ‘ūniki, a graduation ceremony that would mark Mākua as a kahuna kā uhi. This ritual hadn’t been performed in 200 years. “I didn’t want that,” Mākua confesses. “I would have been happy to sit for the rest of my life under Keone … but he told me it was time.” On Mākua’s left hand is an uhi no one else in the world bears. Given to him by Nunes, the emblem marks Mākua’s stature, his link to his spiritual forebears, and most paramount, his kuleana, or responsiblity, to others and his culture. You belong to the people now, Nunes had told him after his ‘ūniki. The sacred pattern is distinct in its simplicity—designed for the one who enlightens others. 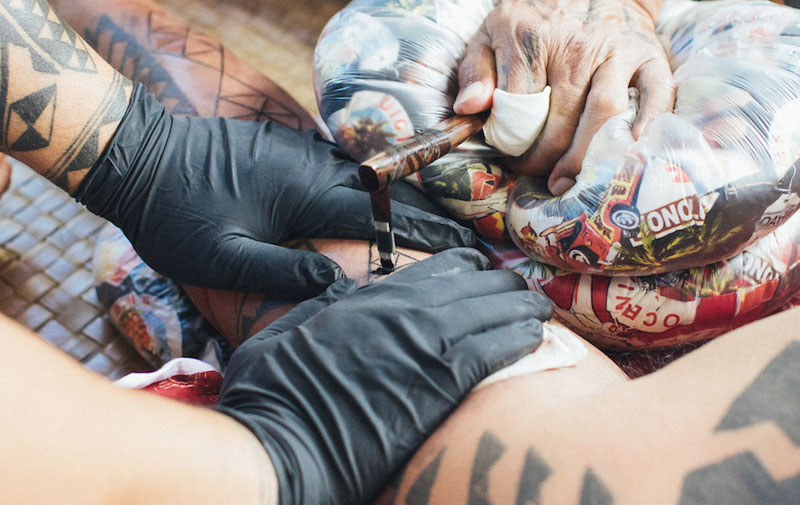 Of Plants and Progeny